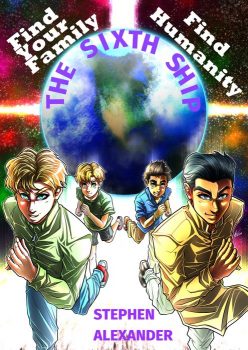 The Sixth Ship by Stephen Alexander A passing black hole forces humanity to send the largest ships ever conceived, the Great Journeys, deep into the abyss of space to find new worlds to live on. Families such as the Grovers of Ventura city are divided between those that stayed behind and those that braved the […] 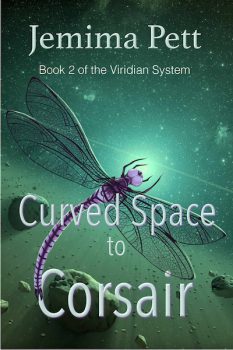 Curved Space to Corsair by Jemima Pett Corsair: a planet in thrall to the Imperium. The Imperium: a dictatorial oligarchy which likes to think it’s benevolent. The remnant of Corsair’s population have sent out a message for aid, for someone to rescue them… and Pete Garcia is ready to answer their call. Big Pete and […]

Curved Space to Corsair by Jemima Pett Asteroid miners Big Pete and the Swede deserve a holiday with Maggie and Dolores, but the Delta Quadrant is hardly a vacation spot. Pete has kept secret the call to his home planet, Corsair, to rescue them from disaster. He uses the excuse of Dolores’ training to become […]

Universe in Flames – Box Set (Books 1 – 5 + bonus Novella) by Christian Kallias A terrifying force has risen from the ashes. Something ancient, powerful, and malevolent. It lurks in the shadows, assembling its forces, and getting ready to set the universe in flames. This book should appeal to all the fans of […]

Sferogyls by Mit Sandru Evil empire attacks a peaceful planet. Fight or be enslaved. On Earth, Tim Andrus was a science-fiction writer, who, after dying, had his head preserved cryogenically – just in case he’ll get a second chance to live again. He was resurrected, not by doctors but by gods. To his surprise he’s […]

Harry Watt Bounty Hunter by Rob Guy For Harry Watt, Bounty Hunter, simply doing what he’s told was never an option. When the best hydrologist on Earth goes AWOL after first helping himself to some company funds, Judge Headlock, Harry’s employer and nemesis, instructs him to bring back the runaway to face justice. A trip […]

The Perihelix by Jemima Pett Big Pete and the Swede. Two miners, made rich by their excavation of the asteroid belt. Maggie, Dolores and Aramintha. Three women, making a living in the Viridian System any way they can, and mostly with miners. It’s a long way from anywhere, and especially from the domineering Imperium and […]

Invasion by PP Corcoran The Carters enjoy life on colony world, Agate. The K’Tai invade. Can the Carter’s use their secret past to save Agate from the K’Tai aggressors? Humanity, previously dependent on the K’Tai for its Redlazore, discovers vast resources of the most valuable mineral in the galaxy on Agate and are now free […]

aHunter4Fire by Cynthia Clement He’s bound to his code, but she’s the one he wants. Will love bring them together, or will duty tear them apart? Firbin is part of the attack on an Albireon stronghold when he rescues Marissa. His expertise in weapons and explosives is needed for the continued skirmish, but he can’t […]

Dream Oracle Series: Syntaurus by Seraph Sanchez Three temple maidens are running for their lives. The bandits have suddenly sprung from their hiding among the mountain pass to ambush the maidens’ caravan. As the temple maiden’s security is quickly being killed all around them, each knows that at least one of them must survive to […]

Hoplite by Isaac Hooke A warlike alien race. A stranded platoon. One man’s fight to save his brothers–and humanity itself–from total annihilation. Rade Galaal and his elite team are dispatched to the farthest reaches of known space to investigate the disappearance of a classified new supercarrier. Equipped with Hoplites, powerful battle suits laden with enough […]

Scouts Out books One and Two by D.D. Loomis When Corporal Ian “Irish Shannon is assigned to the Confederation’s Long Range Scouts (LRS), he joins in the struggle against forces from the Alliance Hegemony. He and his team battle to drive the enemy from star systems under protection of the Confederation. His courage and fighting […]