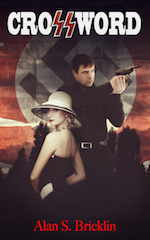 Crossword by Alan Bricklin By early 1944 Hitler’s general staff realized that they had lost the war. Hitler did not. In late 1943 Allied bombers destroyed the Norwegian power station that supplied power for the factory making fissionable material for Hitler’s drive to produce an atomic weapon. The remaining material was ordered to be brought […]