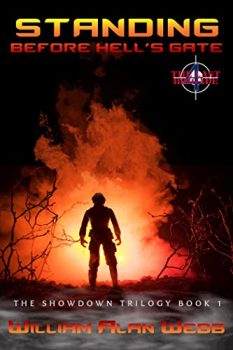 Standing Before Hell’s Gate: The Last Brigade, Book 4 by William Alan Webb When Nick Angriff and the men and women at Operation Overtime dedicated their lives to resurrecting America from the trash heap of history, they never dreamed that meant different things to different people. At the moment that the 7th Cavalry has begun […]

Anyone? by Angela Scott The end of the world? That’s the stuff of Hollywood blockbusters and deep philosophical exercises in school. No need to sweat it. So when sixteen-year-old Tess’s doomsday-dad builds a bomb shelter in their suburban backyard, everyone thinks he’s gone crazy…. …Until fire rains down from the sky, sinking whole cities into […]

Monarchs and Mendicants by Dan Groat Beware of a man who has nothing to lose. A Navy Seal returns to St. Louis from Afghanistan suffering from PTSD and loses everything. Homeless, he wants only to find work and be left alone, but he is drawn into a group of street people who are being hunted […]

AL CLARK (Book One) by Jonathan G. Meyer Al Clark is familiar with trouble. It seems conflict follows him. Still, he cannot allow adversity or danger to crush his dreams. Journey with Al and his closest friends as they fight to save a crippled starship, adapt to a new world and keep the settlement from […]

Genre: Thriller/Adventure/Suspense/Fantasy Ethan Freeman, ex-Special Forces Ranger, wakes up to discover he is the sole survivor of a fiery commercial airline crash that killed his entire family. His nightmare is only beginning when he becomes the FBI’s prime suspect. Only Ethan knows he’s not a cold-hearted murderer, but he has no idea what happened to […]