You are here: Home / *Bargain Books Under $3 / The Last Valentine by Felix Alexander 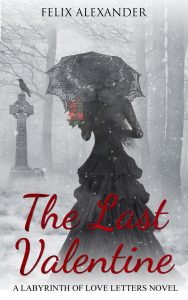 The Last Valentine by Felix Alexander

When Olivia Villalobos finds a bloodstained love letter she endeavors to deliver it before Chief Inspector Sedeño finds it in her possession.

A city along the southern coast of Puerto Rico emerges in the aftermath of the Spanish-American War. Olivia, daughter of a drunkard police investigator who never knew the truth behind her mother’s disappearance, finds a bloodstained love letter in the hidden compartment of her father’s coat. Convinced it belonged to the man recently found dead she sets out to deliver it to the Labyrinth of Love Letters. A mysterious place believed to be an urban legend where the transients of forbidden love leave missives for one another. She enlists the help of Isaac Quintero to find the Labyrinth and they soon realize their quest has opened the door into Old Sienna’s darkest secrets—the perils, madness and depth of tragic love.

What Inspired You to Write Your Book?
The dream of an epic love regardless of obstacles inspired me to write this novel.

How Did You Come up With Your Characters?
I thought of family, friends, and whom I see myself as in the winter of my life when I created my characters.

Book Sample
I assume you heard about the man found dead in an alley recently,” Olivia said as she peered over her shoulder.
“Who hasn’t?” Isaac shrugged. “It’s all anyone wants to talk
“What have you heard?”
“Not much. Only that his identity remains a mystery and the investigation is closed.”
Olivia led him down a dirt road that branched off from Carretera Central, leading them west to the Cemetery of the Nobles.
The cemetery was first established in the wake of the Spanish-American War, to honor the men who fought bravely for Puerto Rico’s independence from Spain. However, after the founding of Old Sienna,
the aristocrats now use it to bury their dead, away from the lower and middle classes. Some claim the cemetery is haunted and that it wasn’t the living that established the graveyard, but rather the souls of the dead who buried their own bodies in the hallowed ground.
“What are we doing in a cemetery?” Isaac asked as he and Olivia walked under an archway lined with black roses and dark green vines. The brightness of the day faded within the boundaries of the black iron fence that circled the graveyard. A light fog lingered over the statues and headstones of the necropolis, through which the gleam of sunlight filtered down in slanting streaks.
“Some secrets should only be revealed in the presence of the dead.”
“As if I don’t already hear enough of the macabre from my uncle.” Isaac shook his head.
“You mustn’t tell anyone what I am about to show you,” Olivia said as she took his hand and led him to a stone bench.
A statue of an angel loomed over them like a sentinel with outstretched wings. The stare made Isaac feel uneasy.
“Promise me.” Olivia insisted.
“Okay, I promise.” Isaac nodded.