You are here: Home / Buyer's Guides / Hoplite by Isaac Hooke 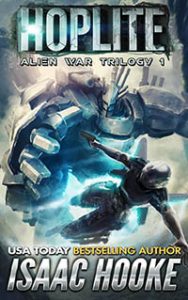 A warlike alien race. A stranded platoon. One man’s fight to save his brothers–and humanity itself–from total annihilation.

Rade Galaal and his elite team are dispatched to the farthest reaches of known space to investigate the disappearance of a classified new supercarrier.

Equipped with Hoplites, powerful battle suits laden with enough firepower to raze a small city, Rade and his team explore the barren world where the starship issued its final transmission.

But shortly after they land, things start to go very wrong.

Cut off from the fleet, stranded on an unforgiving planet, and surrounded by hostiles, Rade and his men find themselves fighting for their very lives against a seemingly unstoppable foe. Even the awesome firepower of the Hoplites might not be enough.

Can Rade overcome his demons in time to save the platoon, or will his team become the first casualty of the coming Alien War?

What Inspired You to Write Your Book?
I'm a big fan of robots, AIs, and mecha, and there weren't nearly enough books out there involving those subjects, so I decided to take on the task -)

Hoplite is the start of the second trilogy, with Rade assuming the role of leading petty officer.

How Did You Come up With Your Characters?
I'm involved in much of the same activities as my characters, so it's relatively easy for me to come up with believable characters who fit the situations. I'm a bit of a joker/prankster, and that quality shows up in a lot of my characters. My facial expressions, the way I touch my face when deep in thought, etc, also trickle down into the actions of the different characters I write.

Book Sample
The badly damaged ATLAS mech toppled to the sand, the grit-clogged servomotors of the machine no longer able to bear its own weight. The motive elements hummed in complaint for several moments as the unit struggled to stand, but then the machine ceased all movement and simply lay there in a toppled, useless heap. No noise pierced the lonely desert air. No birds. No insects.
No servomotors.
And then the cockpit hatch opened a crack, the reverberations echoing loudly along the outer hull. The breach widened. A gloved hand abruptly gripped the rim of the hatch from inside and forced it open entirely.
A figure emerged into the merciless sun. A soldier whose face and body were wrapped in a military-grade exoskeleton: a strength-enhancing jumpsuit with a dented jetpack.
The individual took a few hesitant steps before collapsing onto the sand.
The soldier reached up and removed his helmet, revealing a broad, tanned face. It was all bony angles, a testament to his low body fat percentage. His eyes were weary, yet hard. While he was relatively young, those eyes seemed out of place, belonging to a much older man, or to someone who had witnessed far too much for his age. They also had an oddly glassy quality to them, as was common to those whose eyes had been replaced by the bioprinted varieties.
The man had a thick beard. So he was not an ordinary soldier, then, but special forces—regular soldiers were required to shave.
The man hauled himself back to the mech and then sat against it so that he was shaded from the sun.
He checked the PASS device. His cockpit had been breached during the battle, and the Personal Alert Safety System he wore at his belt had taken a hit. He tried to activate the distress beacon for several moments but the device appeared to be damaged beyond repair.
He spoke into the empty air. “This is LPO Rade ‘Rage’ Galaal, Alpha Platoon, MOTH Team Seven. I have been cut off from my unit. Repeat, cut off from my unit. Requesting immediate evac.”
His Implant had the strength to transmit the communication to any nearby repeaters, but the signal wasn’t powerful enough to travel very far on its own. As such, unsurprisingly no answer came.
“It would appear we’re still out of range, sir,” came a voice from the fallen mech.
“Don’t call me sir,” Rade said reflexively. “I work for a living.”
“My apologies,” the mech answered innocently. “I had forgotten.”
“Really,” Rade said. “A machine. Forgetting.”
“I took major damage in the attack…” the mech replied.
Rade frowned. “According to the damage report, your core was fully intact.”
“All right,” the mech admitted. “You caught me. I was being facinorous.”
“Facinorous?” Rade shook his head. “Damn AIs with their damn verbal vomit. Is that even a word?”
“It is,” the mech told him. “It means, ‘extremely wicked.’“
“Remind me to dial down your sense of humor sometime,” Rade said.
“Actually, that one came from my sarcasm setting,” the mech replied.
“Really. Well let’s set that to zero.”
“As you wish, LPO Galaal,” the mech intoned.
“And call me by my callsign,” Rade said. “I am a MOTH, you know.”
“Yes, Rage.”
MOTH. MObile Tactical Human. An elite force within the navy specializing in direct action missions, mostly guerrilla warfare and counterinsurgency. They were trained to operate on land, sea, air and space. Advanced weaponry, jetpacks, mechs—MOTHs were trained to use them all, and often employed multiple advanced technologies during deployments. Rade had a jetpack attached to his exoskeleton at that very moment, for example; it might have actually proven useful if he hadn’t siphoned all the fuel from it into the mech’s jumpjets during the battle.
Rade crawled away from the mech, moving into the sun.
“Try to stand again,” he told the machine.
The ATLAS hummed, and its arms and legs gyrated up and down, but otherwise the mech remained on its side.
“All right all right, that’s good enough.” Rade returned to the machine again to rest in its shade. “How easy is it going to be to clean the grit from your servomotors?”
“Because of the damage, the sand has gotten into all of the actuators,” the mech explained. “You’d have to take them apart and clean each unit individually. Needless to say, it is not something you can do without the necessary tools.”
“Wonderful,” Rade said. “And what about the power situation?”
“I have enough deuterium to last for at least one hundred years,” the mech replied. “If I idle my processor, I should be able to extend that to a thousand years, at minimum.”
“That doesn’t really help me, does it?” Rade said.
“No, it does not,” the mech replied. “Unless of course, you find some water for me to purify. Or meat to cook.”
Rade examined the dreary dunes around him. “Don’t think I’ll be getting my hands on either of those any time soon.” He studied the position of the sun in the sky. “How long until nightfall?”
“Approximately three hours.”
“Wake me when it’s dark.” Rade shut his eyes and soon fell into an exhausted sleep.

Links to Purchase eBook and Print Book – Click links for book samples, reviews and to purchase

Buy this Book On Amazon

For joining the author’s email/newsletter list you will get:
The Issac Hooke Starter Library