You are here: Home / Featured Books / Featured Thriller: Rolling Thunder: An Historical Novel Of War And Politics by Mark Berent 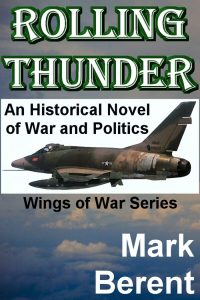 About Rolling Thunder: An Historical Novel Of War And Politics by Mark Berent

Rolling Thunder is an historical novel about the decisive role politics played during the Vietnam War. Its characters range from men in the field to the Pentagon and the White House. Fighter pilots and Special Forces warriors try to do their best but are hampered by President Johnson, Secretary of Defense McNamara, and their staff members who despise the military. Only one aging USAF general, who fought in WWII and Korea, is on their side. His clashes with his Commander in Chief, Lyndon Johnson, are epic in proportion and startling in content.

In Rolling Thunder, the time is late 1965 and 1966 in war zone places such as Saigon, Hanoi, Bien Hoa, Da Nang, and Tahkli. While back in Washington, LBJ sits over lunch and personally picks bombing targets in an attempt to fight a limited war. In Vietnam the war knows no limits.

There, as the hostilities escalate, the fates of three men intertwine: USAF Captain Court Bannister, overshadowed by a famous movie star father who fought in WWII as a B-17 gunner, driven to confront missiles, MiGs, and nerve-grinding bombing raids in order to prove his worth to his comrades — and to himself…Air Force First Lieutenant Toby Parker, fresh from the States, who hooks up with an intelligence unit for a lark, and quickly finds his innocence buried away by the lessons of war…and Special Forces Major Wolf Lochert, who ventures deep into the jungle to rescue a downed pilot — only to discover a face of the enemy for which he is unprepared.

Four airline stewardesses, who fly the civilian MAC contract flights that bring American soldiers to and from the war zone in Vietnam, have difficult love affairs with G.I.s and fighter pilots. After one flight they come under attack while on an airbase in Vietnam.

Young American G.I.s are cursed and taunted as they return to the United States.

Through their eyes, and those of many others — pilots, soldiers, lovers, enemy agents, commanders, politicians, profiteers — Rolling Thunder shows us Vietnam as few other books have, or can. Berent captures all the intensity and drama of that searing war, and more, penetrates to the heart and soul of those who fought it. Rolling Thunder rings with authenticity.
“A taut, exciting tale of good men in a bad war. Berent is the real thing.” — Tom Clancy
“Rolling Thunder is terrific – a novel of exceptional authenticity that hits like a thunderclap. A decorated Vietnam pilot, Mark Berent knows planes and men and battle, and he whirls them around in a story of uncommon strength. I can’t wait for his next book.” — W.E.B. Griffin, best-selling author of Brotherhood of War and The Corps
“Mark Berent writes with great authority and utter realism, immersing the reader in his characters’ every sensation and emotion.” — Dale Brown, best-selling author of Flight of the Old Dog and Silver Tower
“The fighter pilot’s war – you love it and hate it at the same time, and Mark Berent writes it that way.” — Stephen Coonts, best-selling author of Flight of the Intruder
“Berent tells it like it was!” — Chuck Yeager
“The best Vietnam air novel I have read. Berent captures the essence of flying men at war, their agony, emotions, courage, and triumph.” — Brigadier General Robin Olds

This Thriller book is available in these Formats: eBook