You are here: Home / Action & Adventure / Crisis On The Ice by Scott McPherson 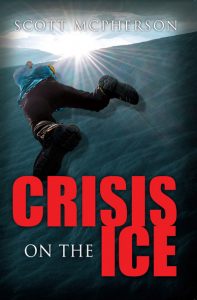 Crisis On The Ice by Scott McPherson

Intrigue, suspense and a little romance. At last in Antarctica, Gabe Hunter and his team of research students go about their work to gather ice cores. Suddenly they are confronted by the appearance of a massive ice crevasse. This is no ordinary crack in the ice, they must travel miles to get around it. Just as they find their way around the obstacle Gabe and his research student discover something so momentous they must get information back to their home base, at McMurdo Station. Before this can be accomplished, they are swept up into an international conflict. The stability of the entire world could be at stake. Not sure they will get help in time, Gabe and his students take some big risks. They aren’t even sure if the whole team will make it out of Antarctica alive.

What Inspired You to Write Your Book?
With a series of books already published, I looked for a new project. I wanted to take a different approach with different characters. Crisis On The Ice has a mystery in it but it is very much an action-adventure novel. It is set in Antarctica, a continent that I visited while serving in the US Air Force. My experience there combined with imagination brought about the genesis for Crisis On The Ice. Antarctica is a desolate but mysterious place. It holds a beauty that cannot be found anywhere else on earth as well as hidden dangers and a harsh climate. What an ideal location for a novel. The drama and conflict are drawn from international tensions and a human tendency to always want more.

How Did You Come up With Your Characters?
In my Jack Sharp Novel series, my main character tends to be much like me. I wanted a different lead character, someone who was young, vibrant, inquisitive. Yet Gabe Hunter is still a “good” guy and he even knows Jack Sharp. He’s from Nebraska, a place I know well, working on a project associated with at real research program from the University of Nebraska. His team is made up of younger graduate students, one from Nebraska, Molly Nelson. She is pretty, intelligent and just close enough in age to provide a potential for romantic tension. Seth Fletcher is a tough, fiery Scotsman from Glasgow. He is a late add-on to the project as Gabe wanted three students. He isn’t easily managed and can be defiant toward Gabe. Min Zhu, from China, fits in well. She is quiet but is also a peacemaker. She doesn’t get drawn into the drama easily. Likewise, since one of the antagonists is from her home country, there is possible stress there as well. Marcus Reeder constitutes the worst kind of “bad” guy. He is smooth and pleasant when he wants to be but utterly ruthless. Chen Han does not fit well in the role but is forced to play the antagonist when circumstances push him to the limit. Other characters are similar to people I may have known in my work or military career.

My eyes snapped open, or at least, as open as they could get. I was having trouble feeling my fingers and my feet felt like wooden blocks. At first, I didn’t know how long we had been in the frigid snow cave, but I could tell that the howling gale had ended. The silence was broken only by Molly’s breathing. Crystals of frost grew from the hood of her parka and it felt as though she wasn’t moving. My wits were slowly coming back. I had tried to stay awake but sleep had overwhelmed me. Why had I even woken back up? As the realization that the storm had passed came to me, I suddenly knew we had a window of opportunity. I flexed my fingers, shivered and tried to move my toes.

“Molly! Molly! Wake up! We’ve got to get going,” I said in a hoarse voice, breaking the intense silence. It still sounded muffled coming through my frosty balaclava.

“Molly, wake up. Move your fingers and toes,” I demanded, beginning to rub her arms through the dark green parka sleeves. I felt her shake her head inside the fur-lined hood.

“Dr. Hunter? Where are we? Oh! I’m freezing,” she gasped and I felt her try to move her arms and legs. She began to shiver violently.

I moved my face close to hers, “Molly, the storm is over. We can get going. We should try to leave before it starts up again.” I could see her eyes in the dim half-light, lashes crusted with frost. She had icicles hanging from the fur above her eyes which grew wide as she began to comprehend. Rolling over onto her back she sat up. Her voice stronger now and she said, “We fell asleep! I really can’t feel my feet very well.”

We helped each other to our knees in preparation to get out. The snow cave was too low for me to stand, so we crawled on hands and knees out the entrance.

When the storm had blown up we had needed to work fast, in order to get out of the dangerous wind. Using small shovels we had cut out a space in the compacted snow as we had been trained. Like cleaning out a pumpkin I had burrowed down, at an angle. Pushing the snow backward. Molly had moved it away from the entrance. In a short time, I had been able to carve out a space for us. We had stayed in there, sheltered from the wind. Though still very cold, the cave had probably saved our lives.

At first, shoved together in the small space, claustrophobia had plagued me. Talking quietly with Molly had eased the tension but the storm had raged on. The screeching wind had made us glad to be under cover, and the fear gradually went away but exhaustion and cold had led to us both falling asleep.

Now all was quiet, and I couldn’t get out fast enough.

I was breathing hard as I followed Molly. The entrance was blocked by drifted snow, but Molly just pushed through. As we cleared the opening we almost rolled out and struggled to get to our feet. The fierce storm that had driven us to dig our snow cave was nowhere to be seen. It was hard to tell that we had even been in such a blizzard. The only evidence was a mound of snow where we had abandoned our snowmobile. The pale-yellow sun shone at its usual 30 degrees above the horizon illuminating the bleak white scene. The only objects breaking the view of white snow were shadows of mountaintops that looked like violet cutouts along the distant horizon. They were much farther away than we needed to go to return to our base of operations.

Molly stood flapping her arms. She looked like a large green bird trying to fly away. “I’m so cold,” she said. “I can’t stop shivering.”

“Me too,” I replied. I thought about trying to warm her up but, instead moved over to the snowmobile. My gait wasn’t normal as my feet felt dull and I wasn’t looking forward to the cold ride back to the base. Totally dependent on the snowmobile working well, I realized how vulnerable we were. We had been traveling for an hour before getting caught in the storm and we were still over an hour away. Despite previous trips to Antarctica and hours of training, I am continually amazed at how quickly such a storm can blow in and how difficult life becomes in the midst of a blizzard.

Brushing off the seats and clearing the air intake, I sat and looked down at the key, hoping it hadn’t iced over. It turned smoothly and the engine roared to life. We did high-fives knowing that we wouldn’t be stuck out in the frozen land.

While the engine warmed up, I handed the satellite phone to Molly.

“How long till we get back?” she asked moving closer to me, so I could hear.

I said. “It should take us about an hour. I’ll push it going back. Will you be okay?”

She nodded. Reaching up, she swept her hand over my hood. Snow rained down across my face.

“It got covered when you got out of the snow cave,” she said. Her hand lingered for a moment on the side of my face, then she moved away.

I was surprised by her tenderness unsure what it meant. As I thought about that, she walked away from the noisy snowmobile. Putting the phone to her ear, I saw her wait, then look at the phone. She tried several times but came back toward me. “I don’t get anything.”

All I could do was shrug my shoulders. I looked up at the sky as if it would somehow give me an answer to the failure of the call. “Okay,” I said, “Let’s hope they don’t send the Air Force out after us.” I made a few adjustments to straps on our trailer which held our gear.

We had checked the weather report from McMurdo Station before setting out from out camp, but the storm had blown in without warning. Weather predictions are like fantasy football. There are planning and research involved, but the reality is often quite different than expected. In Antarctica, weather patterns aren’t as scripted as they had been at home in Nebraska. There, a storm never came from the east. It was always from a westerly direction. Weather forecasters could tell, almost to the minute, when a storm would arrive at a given location. In Antarctica, however, a storm can come from any direction since east and west are more “relative” down here. You can be hit by a storm going east, then have that same storm come back over you from the west. It can be maddening. We had lost our signal when the storm hit and we still couldn’t get through to anyone. It didn’t make sense to me because the storm shouldn’t have affected satellite communications.

I tried the radio, mounted on the snowmobile, knowing that we were too far for it to reach. I wanted to, at least, make an effort.

Molly pulled back her hood and put on her helmet. She climbed onto the seat behind me and tapped me on the shoulder, her signal that she was ready. I had my helmet on and spoke into the microphone. “How’s your reception?”

“Have your feet woken up?”

That was a good sign. At least, they weren’t frozen yet. “Okay, let’s go.” I revved the engine and we were on our way.