You are here: Home / Buyer's Guides / A Master Passion by Juliet Waldron 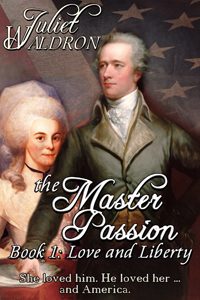 A Master Passion by Juliet Waldron

A MASTER PASSION is the story of the marriage of our brilliant first Secretary of the Treasury, Alexander Hamilton, and his wife, Elizabeth Schuyler. It begins with a whirlwind Revolutionary War courtship at Washington’s headquarters. Conflict, however, is built into this marriage.
“…And hence one Master Passion in the breast
Like Aaron’s serpent, swallows up all the rest…”

Betsy’s passion is Alexander. Hamilton adores his wife and children, but, sometimes, he loves America more.

What Inspired You to Write Your Book?
Alexander Hamilton has been in my life since I was eleven, when I pulled a dusty 19th century novel out of the shelves of our local used book store and began to read it. I've done a great deal of research on him in the 50+ years since, reading my way through all 21 volumes of his correspondence and many other pieces of primary source. In the course of my fascination with him and his family, I learned that he was a prodigy, a boy who propelled himself from an orphaned, penniless merchant's clerk who lived on a small West Indian island, to an aide de camp to General George Washington in a mere decade. His wife, too, lived an astonishing life, as a sort of American princess, so Alexander's marriage, too, had a fairy-tale quality to it. As the American Dream was given impetus by his plans for the future of his adopted country and by administrative genius, none of us would live as we do today if Hamilton hadn't existed. He was an imperfect human being, too, who made mistakes and made decisions which sent him to a dueling ground death. Long story short, I can't imagine any better American subject for a novel. His whole life was an adventure.

How Did You Come up With Your Characters?
As above, from many years of fascination, I know Hamilton and his wife very well. Because it's important to me, I've worked to make these characters true to the breathing people that once lived. Again, I lean on letters, diaries, etc. for my understanding of emotional states. His wife burned much of their personal correspondence, as did other 18th Century women whose husbands were perceived to be "great men." This writer does the best she can. Sometimes, of course, events remain obscured–200+ years and the natural desire of the famous man's family to keep some things secret.

How I Met Alexander Hamilton

In a sepia shadowed bookshop,
Where an imperious charcoal
Cat with yellow eyes glared from
A fly-specked window,
I found you.

You—
Ecstatic, thin, fair head thrown back,
Face shining, 1776 on fire!
No wonder your friends,
Fellow aides-de-camp to the great
George Washington, nicknamed
You “Little Lion.”

Across time
We held hands,
Wandered brown-sugar sands,
Watched waves rise and
Toss wild white manes against the reef,
Brother and sister—
We were alike,
Children in peril.

Sharing a sick feeling, Alex and Jamie Hamilton stood on barefoot tiptoe and peeked through flimsy wooden louvers, all that separated the rooms of their small West Indian house. Both boys were red-heads, but there the resemblance ended. Eleven year old James was well-grown and strong. Alexander, seven in January, was delicate, fast-moving and nervous, like a freckled bird.
“An idiot would have known not to trust him.” The beautiful dark eyes of their mother flashed. Rachel faced her husband, a slight man of aristocratic feature, who wore a white linen suit. Like him, it had seen better days. His wife’s tone was challenging, her arms akimbo. Her stays, containing a generous bosom, rose and fell.
“I—I—took him for a gentleman.” Father sputtered, attempting to fall back upon a long ago mislaid dignity. “He gave me his word.”
“His word!? Which means bloody nothing! How many times did I tell you what was going to happen? How many times?”
“Shut your mouth, woman!”
A sharp crack sounded as he slapped her. Rachel, hair spilling from beneath her cap, staggered backwards. From the kitchen came the fearful keening of Esther, their mother’s oldest slave.
“There’s naught canna be dune noo!” James Hamilton, his long face flushed, roared the words. Scots surfaced whenever he was angry.
“Yes, nothing to be done. As usual.” A livid mark glowed upon Rachel’s face, but she, with absolute disregard for consequences, righted herself and finished what she had to say.
“This time Lytton’s going to let you go. And if you can’t even manage to hold a job with my kinfolk, where will you get another? What are we supposed to live on? Air?”
In spite of the fact that it was winter on the island, the best weather of the entire year, Alexander shuddered. Distilled fear slid along his spine.
How many times in his short life had he watched this scene replayed? Listened to Mama shout Papa’s failures, watched as his father, humiliated and enraged, used his fists to silence her?
A business deal gone bad! Money lost….
Will we move again?
Every change of residence, from Alexander’s birthplace on cloudy Nevis, to St. Kitts, and from there to St. Croix, had carried them to smaller houses and meaner streets. The carriage, the two bay horses and the slaves who tended them, were only a memory.
Mama was shrieking now, about loans and due dates, things which she declared “any fool” could understand. Frozen, knowing what would surely come, Alexander watched as his father, crossing the room in two quick strides, caught his mother by the shoulders.
With the strength of rage, he threw her like a rag doll. She struck the wall so violently the flimsy house shook. Small emerald lizards stalking the mosquitoes drawn by candlelight, vanished into shadow.
Silenced at last, Rachel crumpled to the floor, sobbing. Her once gay calico dress, muted by many, many launderings, lapped her. The under-shift, always scrubbed to a sea-foam white, drifted from beneath.
James Hamilton, breathing hard, blind with rage, tore open the door and strode past his cowering, terrified sons. For the last time, Alexander saw his beloved father’s face, a sweating mask of fear.